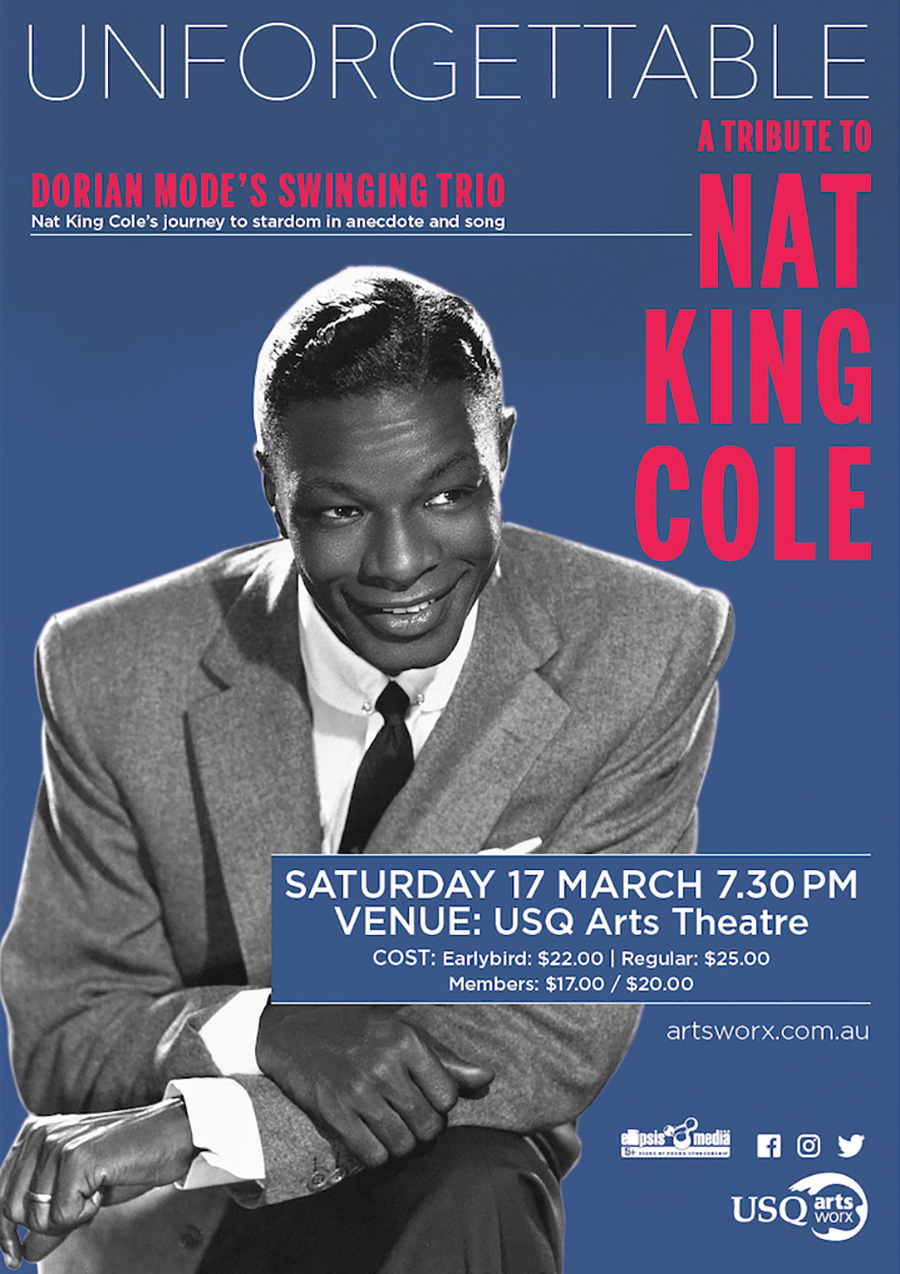 While other teens were buying Cold Chisel and ACDC records, Dorian was spending his pocket money on Nat King Cole records, imitating Nat’s piano and vocal stylings (and has the playground bruises to prove it!). A lifelong fan, Dorian meticulously researched Nat’s catalogue to choose twenty iconic original arrangements to transcribe and weave into a show about Nat’s life.

Since 2015, Dorian has performed the show to sellout crowds across the country – from Sydney’s Independent Theatre, to sellout shows at the Gold Coast Performing Arts Centre. A natural entertainer, Dorian and his swinging trio will take you through Nat Cole’s journey to stardom in fascinating anecdote and song, including the classics: Unforgettable, Route 66 and Paper Moon.

Dorian Mode is both a multi-award winning musician and writer of laugh-out-loud books: A Cafe in Venice (Penguin) and Mozart Maulers (Penguin) have been bestsellers here and in Europe while Dorian’s last CD was awarded two ABC Music Awards. He has recorded over seven CDs for such labels as EMI and ABC Jazz. And over the years has performed numerous jazz festivals, theatres and concerts including the Sydney Opera House. His entertaining shows are not to be missed!

On Sunday 30th October, Nambour’s Bison Bar was swinging to the music of Nat King Cole. Not the original, but the celebrated DORIAN MODE TRIO.  With Dorian on piano and vocals, John Conley (from Galapagos Duck) on bass and master guitarist Bruce Woodward supporting Dorian, the afternoon was a magical tour of Nat’s life and music. Dorian, who not only excels on piano and vocals but is a brilliant anecdotist.

From the opening “Route 66”, just one of Nat’s many hits to the final first set ending “Little Girl”, Dorian interposed stories, many not known before, of Nat’s continual problem of racism. Fortunately his musicianship overcame many of these hardships and afforded him the accolades and fame he deserved.

“Nature Boy, Sweet Lorraine, Ramblin’ Rose, Just You Just Me, Straighten Up and Fly Right, When I Fall in Love, Orange Coloured Sky” were some of the songs that Nat made hits. Dorian not only tells these wonderful stories but still had time to sing and play 18-20 songs (I counted